It’s gaming festival season again and they really don’t come much bigger than Insomnia in the UK.

For my sins, I offered my services to come and help out on the Microsoft stand at insomnia, walking the Xbox booths, supporting the indie devs with their stands and talking about the awesome new Hour of Code initiative bringing free code learning to the masses, from ages 6-106.

A large part of the Microsoft stand was dedicated to a host of recently released and upcoming ID@Xbox titles, running both on XboxOne and also Windows10.

Many of the ID developer’s themselves were on hand to answer queries and probe players on their enjoyment factor. With a lot of these being pre-release, the developers were using the opportunity to take notes and make final alterations to make their games the best they could be.

ID@Xbox also took to stage to show the inner workng behind 3 of it’s soon to be relased titles, namely:

Seeing all of these titles on the big stage and indeed, the big screen was totally awesome. You can get a sneak peek on the fun here on the Insomnia56 Flickr album 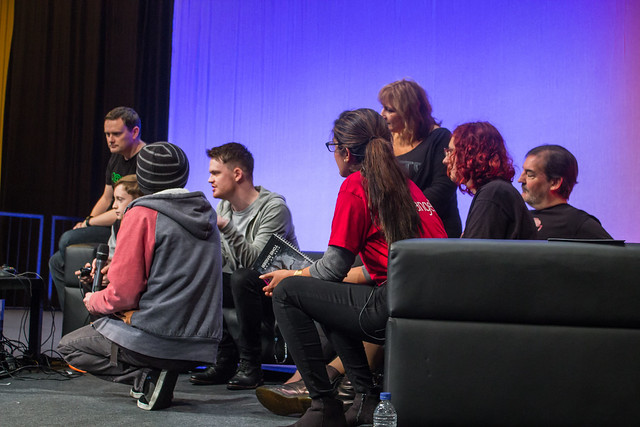 Starting with the most awesome part of the event I was supporting, the Hour of code is yet another initiative by Microsoft to get people involved in learning to code, this time they are lowering the barrier even further aiming at primary kids and higher (ages 6.106). This new track builds a more visual interface for understanding the base concepts behind coding, the logic and underlying bricks needed to chain commands together to achieve a task.  What is really nice this time around is that the lessons are now themed, taking the gamification of learning to a whole new level, see here:

Each theme follows a level paced course complete with teaching notes for assistance as well, for parents and teachers alike.  Although to be honest based on the masses of kids who jumped in on the stand, they seemed to make short work of the basic classes, ready and hungry to tackle the more advanced courses.

As you can see, we were very busy.  it was like this most of the day, by the end both I and the two MSP’s (Microsoft Student Partners Khalid and Edward) were very tired, yet eager to help out the next student or parent.

For my part the people mostly interested were the parents, eager to find out what was out there to help their kids achieve their best, they were extremely surprised and excited to find out that all the tools, resources, videos and content were being offered COMPLETELY FREE, no catches, no sign-ups (unless you want your achievements!).  We attracted parents and kids from all walks of life, whether they here in state education, private or even home schooled, all were very eager to know how to get started!.

Hour of code doesn’t stop at just one hour!

The main aim with the title, is that you get what you need to get started and learn the basics within 1 hour.  Obviously you are then encouraged and given the tools necessary to take your further from that.  But don’t let me put that to you, check out the recorded session of Hour of Code by none other than the awesome Lee Stott and Lilian Kasem (https://channel9.msdn.com/events/Hour-of-Code/Dream-it-Build-it-Host-it)

There are load of more resources beyond the kick off video, including:

So what are you waiting for, get learning, get coding and get building your own project, be it a game, website or the next IOT solution.

Xbox marketing at its best

If you like Xbox games, as many of the visitors to the stands did, you will have a wealth of games to try out (and then head to the Game stand next door to buy), anything from the new Tomb Raider, Halo 5, Fifa, Forzza and much much more.  Even if you just want to stand by the sidelines and jest at those playing the latest Guitar hero on their custom stands.  Also in attendance was Lego Dimensions, which by all accounts will drain me of any remaining cash I have in this festive period. Might even let my youngest son play as well

P.S. If you spot this guy on an Xbox stand, give him a hug pat on the back from me. He works his socks off to ensure everything goes off without a hitch!

All in all the event was a complete blast. Talking to kids young and old alike about learning to code was awesome, seeing their delight when they were told it was all free was priceless.  I even got to talk about ID and it’s developers, including what it takes to get on the program, there are a lot of passionate developers who want to target the platform and there is so much on offer if you can show you have the drive, commitment and passion to complete your project and get it out there.  Was even better having some of the ID devs to hand to share their (non-NDA) experiences

If you get a chance to get to the next event, I highly recommend it.  If you’re really hard core, you can also stay at their custom accommodation, not for the faint of heart!

I’d also like to thank the rest of the team on the stand, you just never know who you are going to meet