At the time of writing it seems that Microsoft has not implemented PCL support from the Visual Studio Express editions as they are aimed at single... read more

Now I waffled on about the theory last time for what Portable (or PCL – Portable Class Libraries) can offer with frameworks like MonoGame, especially when you want to take you are project to as many platforms as possible, the main thing you want to achieve is to only have to put into a specific platforms project that which is native to that platform and keep everything else simple and in one place.

So with this tutorial I will walk you through the practice of what it takes to go portable and what it can do for you.

I will start with the sample I have used for several of my previous tutorials so that you are familiar with what we have to use, so download the code drop for stage 3 in the previous shocking tutorials here. 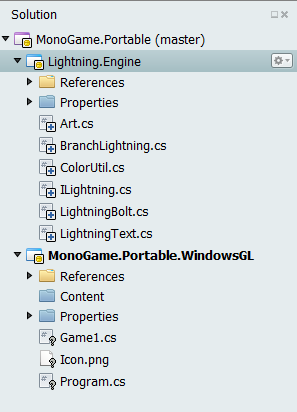 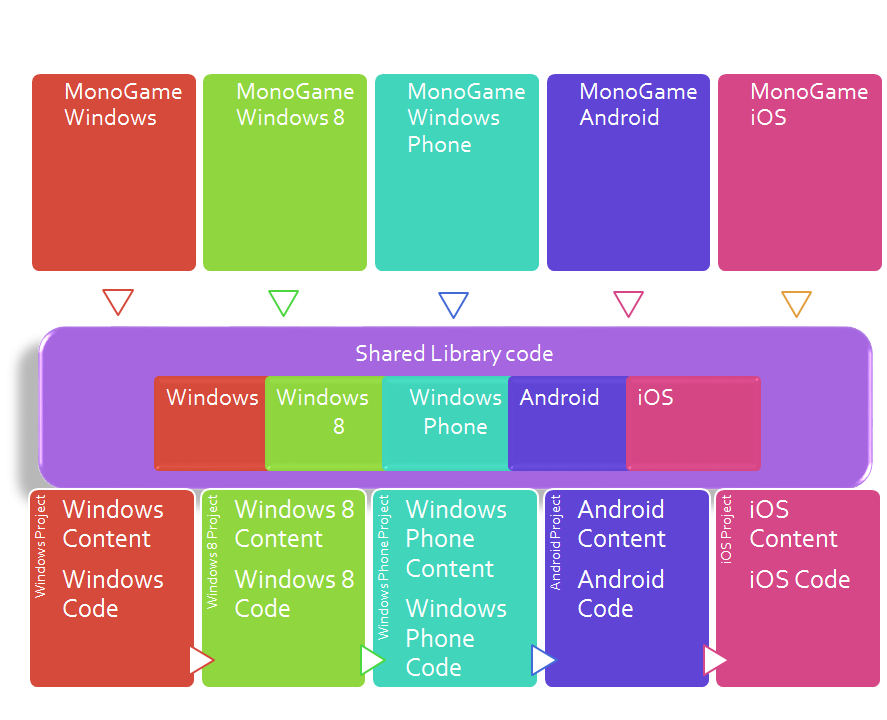 If you have not got NuGet yet, then install this VSIX (visual Studio Extension) package and then “goto 1”

From version 4.03, PCL projects have been supported natively in Xamarin Studio

To keep things simple lets just start a new project and re-use all the code from the above sample, we will even re-use the existing content builder project to keep it simple.

So to start off by creating a new MonoGame project of your choosing. Myself I am going to keep it simple and create a WindowsGL project. (In Xamarin Studio

*Note If you have not done so already and are using Xamarin Studio, be sure to grab the Xamarin Studio add-on for the MonoGame templates here (also available for MonoDevelop if that is your fancy) 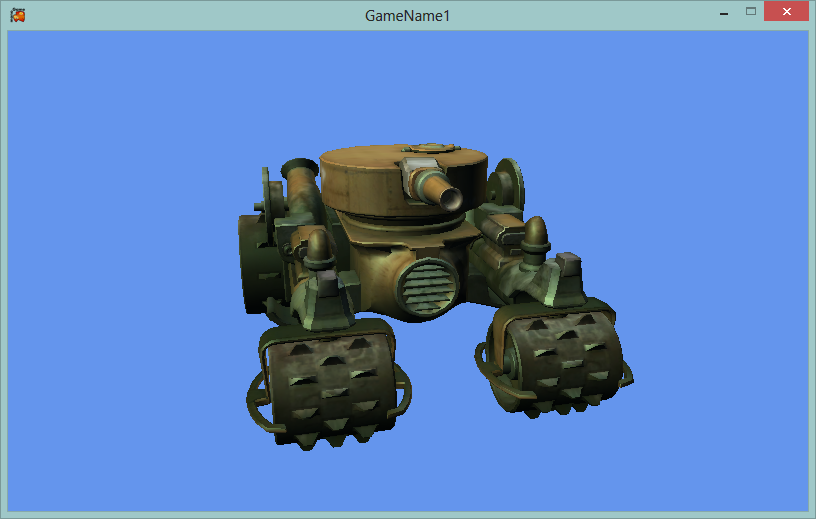 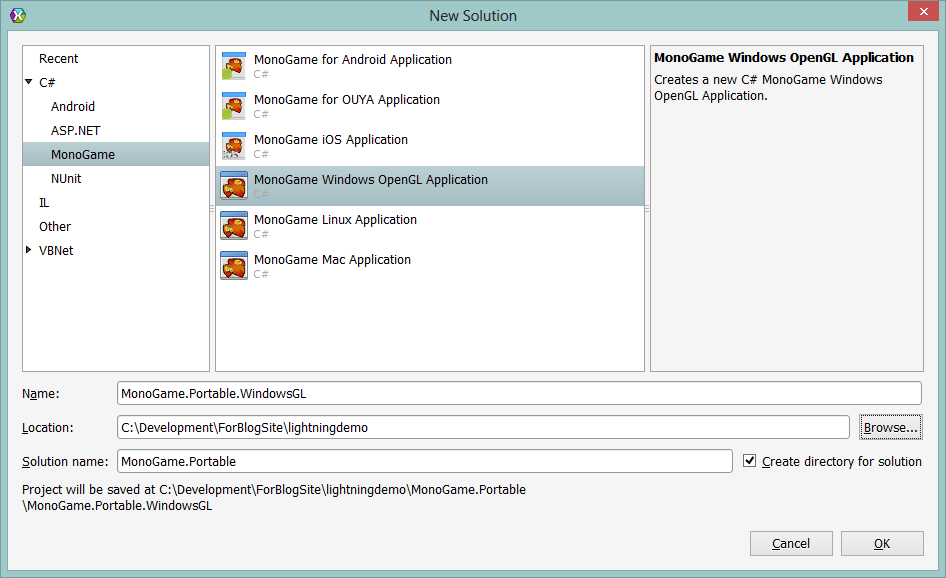 Just give the new PCL (Engine) library a simple name, in this case I have named it “Lightning.Engine”.

Next we will add our original engine code into the portable library, so copy these over from the previous sample and then rename the namespaces in each class to “Lightning.Engine” to match our project: 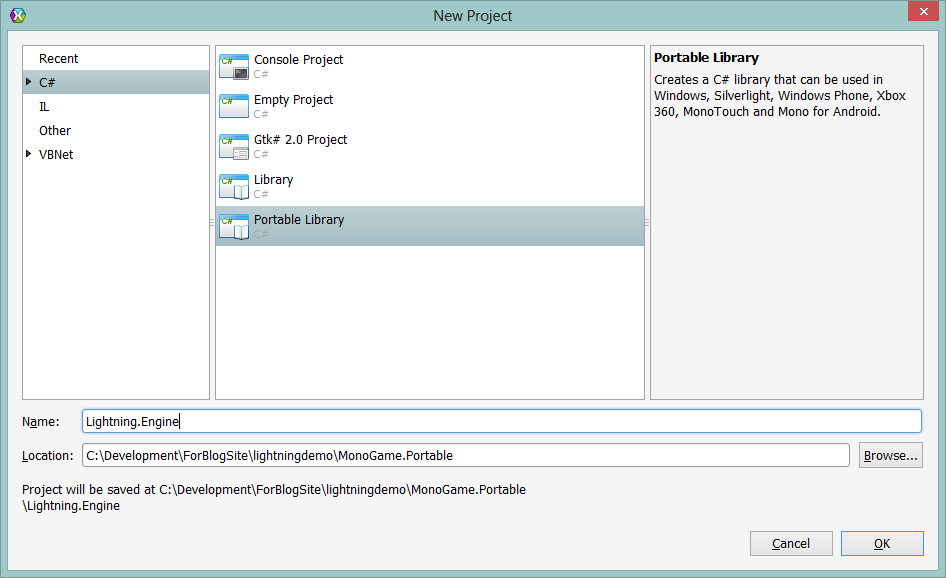 At this point you might think “well I have my PCL library, why do not I just use one of my existing MonoGame references?”, as well you should but just try it and see. You will either get:

None of which will result in a project that will build, in fact in the second case above you might think it has worked but basically, it did not

OK, so having our logic in a separate lib is nice but what about the rest of the game, well let’s take this a bit further then. Copy over the original “Game.cs” class and embed that into the library as well and for good measure and rename it to something more meaningful for our engine like “LightningGame.cs”.

Satisfy any framework dependencies that are required for the class to function. e.g. if GraphicsDevice is used, which was part of the base game class)

So now that our entire game is hosted within the PCL project, lets update our platform project to run it, here is where you really start to see the effort paying off, especially as you add more platforms to the mix.

*Note, do not forget to build and add your Content to your platform project to avoid the dreaded “Could not load Content” error

Instantiate a new instance in the game constructor

Call the update class during update

Finally tell the engine to draw in the XNA draw loop

Sure you could achieve something similar by using platform libraries but any change you make to the engine library could potentially break any of the platforms you support, with PCL projects you are guaranteed that all platforms will continue to work else the PCL project itself wo not build.

So now in each platform solution you can manage just what is needed for that platform, such as Share Contract and fly-outs on Windows 8, Notifications and NFC on Windows Phone plus whatever else they do on those other platforms (so shoot me I am not an Android or iOS expert)

If you want to keep track of the different ways of building multi-platform / Cross platform solutions, keep an eye on my presentation repository where I will keep adding more code in the samples for use, alternatively there is a lot of work going on to clean up the samples for MonoGame in the MonoGame Samples repo’s so you will have another source of reference.