In the run up to the launch of my first published title (a book this time) I’m going to be doing some short snippets from some of the many exciting things you will learn within its pages.

Edit – seems only 5 minutes since I posted this article and already we fine other useful frameworks to assist with using AnimationCurves on their own. This handy little project enables some interesting Editor enhancements... read more

In the run up to the launch of my first published title (a book this time) I’m going to be doing some short snippets from some of the many exciting things you will learn within its pages.

Edit – seems only 5 minutes since I posted this article and already we fine other useful frameworks to assist with using AnimationCurves on their own. This handy little project enables some interesting Editor enhancements to allow copying, pasting and even the extraction of animation steps from a curve. Here’s a nice article that explains it all, fantastic effort!

The book was an interesting challenge for me and is written with the same flair I use within my blog, I have always felt it is better to educate and show you, not only how to do things but also why you should do it one way over another, plus if there are any alternatives, I will point them out. As a reader you should be informed about your choices (and then make your own mind up

Through its pages you will build an RPG game framework which you can then extend and make your own, the aim is to give you enough hints, tips and help to build your own finished game.

Here is what you should expect from the title:

there is more than enough information within this titles pages to get you 90% there with your own game, all you got to do is finish it and add lots more content!.

As with everything I do, if there is more you want to know on any subject within the book, drop me a line or comment on my blog and I will be more than happy to write even more on the subject.

Enough about the book – Where is my snippet

Right, the first snippet from the book is about:

Now for those of you who have dabbled, Animation curves are primarily use by the new Animation system, they give you a fine level of control over how editor properties should change over time, either gradually, sharply or according to some style of bezier curve. The curve editor in the animation sheet is very powerful (and keeps getting updated each release!). It basically allows you to:

There are more but these are the key points. All well and good but did you know you can use this awesome system OUTSIDE of the animation system.

At its core, all the Animation Curve system does is to change a value up or down over time according to a pre-set pattern, this is also referred to as tweening in some circles. So what if you could just make your own curves separate to an animation to control say:

There are many places a tweening system (like LeanTween, HoTween and iTween on the asset store) do for your games.

Note, obviously a single curve is not going to completely replace advanced tweening systems like those mentioned above, it is all a case by case basis, how difficult does your system need to be for each thing you do. No one size fits all!

So, how would you implement this? Actually, very, very easily.

We start with a property in which ever script you need to access curves from, first create a new script, say called AnimationPath and replace its contents with the following:

This gives us a base framework for our curve and some properties to control where an object starts and where it will end up plus a timer.

If you now save this, and in Unity create a new scene, add a GameObject like a sphere and add this script to it, you will see the following in the editor inspector:

We have a curve (all on its lonesome without an animation system to call home), clicking on the curve inspector property for the My Transition Path value, will then give you the standalone curve editor:

A bit boring as we have not configured it yet, if you click on one of the presets at the bottom of the window, we can begin crafting our own curve, or just use the preset itself:

From here you can do most of the tasks that you can do in the Animation Dope sheet curve editor (except add events). You can also save your curve (if you create a pretty tricky one you want to reuse) by clicking on the cog con in the bottom left 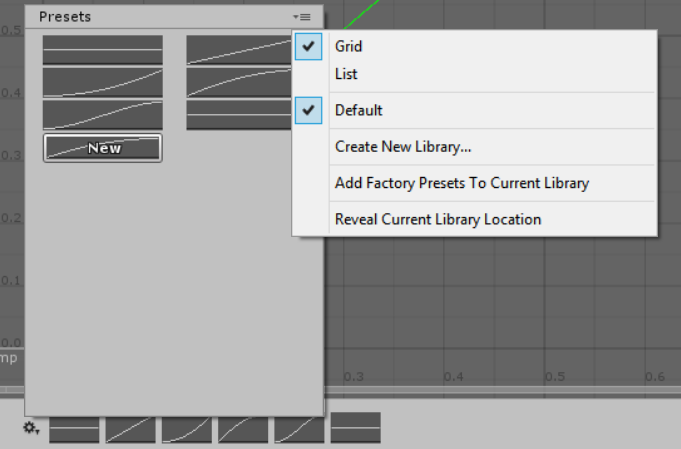 Lots of options to choose from but enough about the curve itself, we want to actually use this to do something. Returning to our script, let’s enable the behaviour that when the user clicks or taps on the screen it moves the object it is attached to, but doing so according to how we have configured our curve, slow, fast, or in a weird and wobbly motion.

Back to the Script

So with a simple enhancement to the script earlier, we can add some additional properties to track a transition from one point to another with a timer to track the delta:

We then add a simple Awake function, to check (remind you) if the Animation curve has been configured and warn you if it hasn’t (always a good practice):

And finally an update method to check input and transition the GameObject it is attached to from its current location to a point on the screen. In this method we need to:

The line to take notice of is the following line:

Where we use the Evaluate function of our configured curve to denote the amount of movement the GameObject should move (in this case) for the current frame. This results in the following motion: (please be gentle this is my first animated GIF, got to be in with all the cool kids these days):

So as you can see, depending on how far the sphere has to travel, the power curve quick to begin and slow to stop but steady in-between. By just altering the curve we can alter the behaviour without changing any code.

Why stop there, how about using two curves to create a path, just for fun I created sine and cosine curves and applied them to the sphere’s transform as follows: 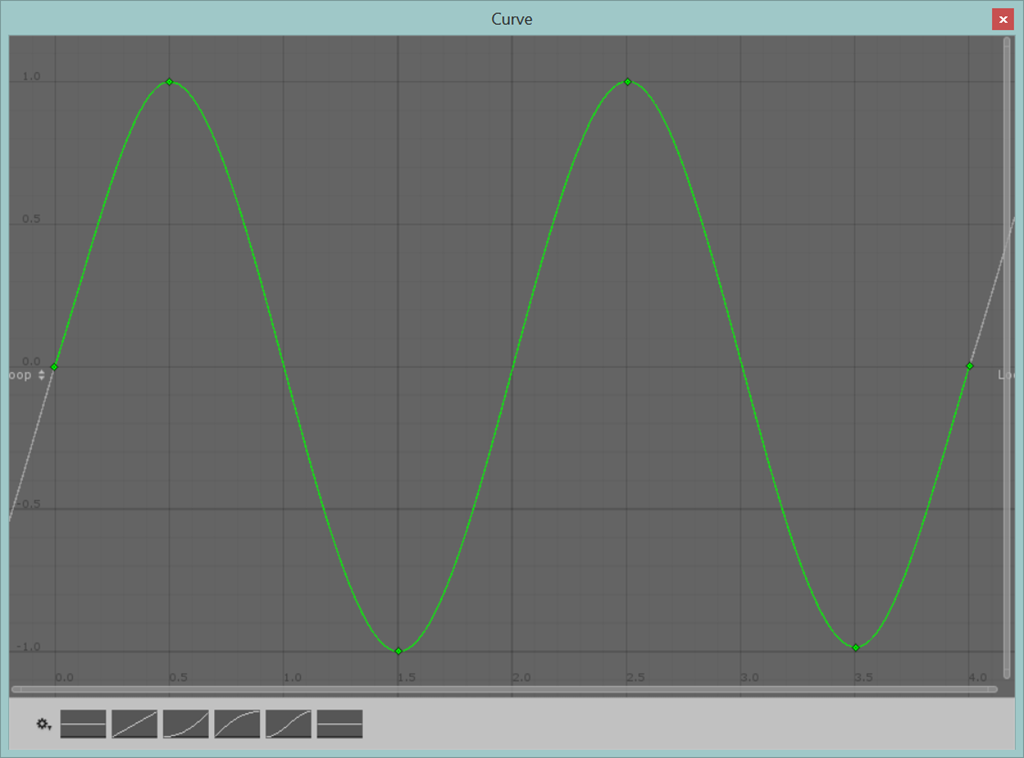 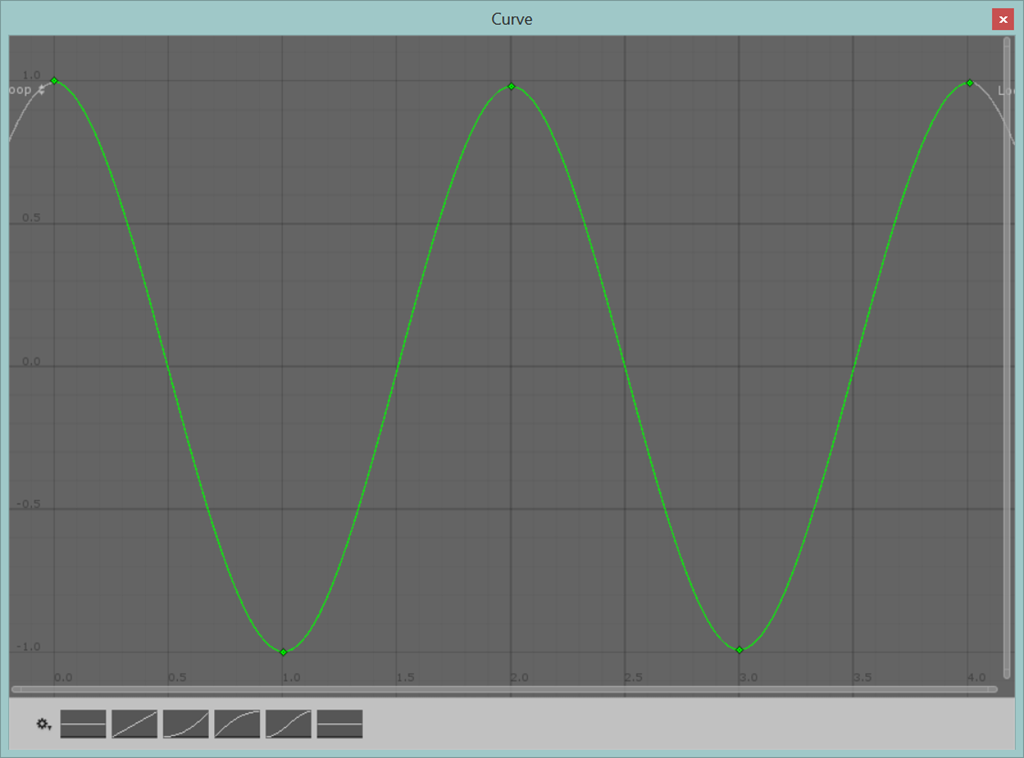 Resulting in the following animation:

Granted the above example would be a lot simpler to do in code, it is just a more detailed example

Just a little extra fun but you get the idea, there are numerous possibilities for when you want to configure a curve to animate or lerp a value within a range.

Doesn’t have to be smooth, you could end up with something like this: 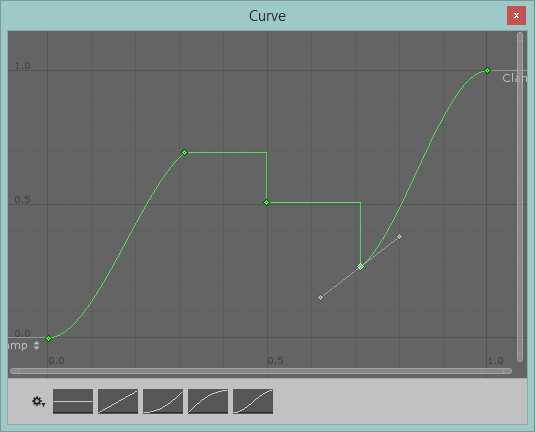 And goodness knows what that could do with that

We hope you enjoyed the show

I do hope you like this little snippet, just one of (hopefully) many little break out sections from the book. These snippets do have a lot more detail as I have more space to work with (it is really surprising how restricting 500+ pages gives you

) but everything you need to know is covered in each section.