XNA to SilverXNA-part 6 Adding a bit of Flash

Now one thing that was not in the original game (unless you count the player / enemy animations which to face it are part of the gam anyway) was any kind of animation to the UI experience, namely in this case the Overlay’s we just put back in. They are a bit flat and just show on the screen, now in XNA to do any sort of screen transformation / animation or effect generally speaking does take a lot of effort because you have to build your own animation system to do what you need where as... read more

XNA to SilverXNA-part 6 Adding a bit of Flash

Now one thing that was not in the original game (unless you count the player / enemy animations which to face it are part of the gam anyway) was any kind of animation to the UI experience, namely in this case the Overlay’s we just put back in. They are a bit flat and just show on the screen, now in XNA to do any sort of screen transformation / animation or effect generally speaking does take a lot of effort because you have to build your own animation system to do what you need where as in Silverlight there is already a fairly powerful one right at your fingertips.

Now there are actually two approaches to animation in Silverlight those being Visual States and Storyboards , now under the hood they actually represent the same thing as visual states become storyboards but they are provided for a quick approach to get animations done, whereas full storyboards have a lot of granularity controlling to the second what happens when and how.

Keeping things simple we will just add some visual states for displaying the correct view at the appropriate time with a little smoke and mirrors show. I will point out one thing at this point as this will actually undo what we have previously implemented in the ViewModel as we are passing control of the visibility over to the animation instead of directly controlling it but this is a good thing because instead of just popping up our overlays we are going to animate and fade them instead. We will then add a simple storyboard to animate the items within the overlay controls just to show the difference.

As usual full source for this chapter can be found here on Codeplex:

(Please excuse the XAML code sections here, just found out our syntax highlighter does not support XAML, so bear with me while I try to find a better work around. Currently looking at SyntaxHighlighter evolved which supposedly will support XAML but it is wordpress only so will need a little magic) * Update, still working on it but I lost my changes to my version of the highlighter so i need to re-create it or else loose what I currently have working dagnamit!.

About Animation and MVVM

Pragmatism though teaches us that there must be a middle ground here, yes Animation is a visual representation that is driven by how the app looks and feels but our game needs a smart way to let the view know what to show and when.

Judge for yourself in the articles below (P.S. Jeremy Likeness makes a very compelling argument):

As you can see there is always more than one answer to any issue, for the example here we are going to use a Dependency Property with binding to control our visual states (best approach I’ve come across) and I will show you event binding (the simple way) with storyboards.

First off we will start by defining our Visual State Animations, key thing to remember that these are states in the true meaning of the word and no object can be manipulated by two different operations. Think of it like this if you have a glass on a table and two people sitting at that table then only one person can move that glass at a time, if the other person tried to move it then it wo not be where they expect it to be because someone else is controlling it. A poor mans attempt to try and explain how it works but worry not if you try and do something wrong Blend will happily slap you in the face and tell you off!

So to begin we need to define the starting state for our screen, in our case the default state is when the game is running, anything else will be placed on top to show that something else has happened in the game, to this end we need to hide away our overlays ready for them to come to light when we need them.

To do this update the following properties of the three overlays on the “GamePage.XAML” in blend (it is just easier):

This will place the overlays off the left hand side of the screen and make them invisible.

I will mention one thing here, you may ask why I reduce the opacity to hide the control instead of just setting the Visibility to Collapsed, the answer is simple, Opacity when animated can be gradually altered to give a fade in / out effect, visibility is just another state on/off so it will just pop in or out with no fading. Another point to make is that if an item is visible then it will still respond to interactivity or block interactivity to controls beneath it so plan your animations / visual states accordingly, lastly if you combine altering opacity with visibility (because you need to access controls underneath) then altering the opacity has no effect because visibility will be updated last (so it will fade in while it is hidden and then pop into view).

So in the States tab click on the “Add State Group” icon to define our top level group (State groups are just a way of organising groups of states) as shown below: 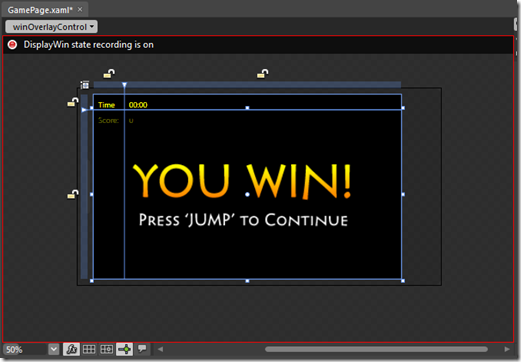 Do not worry about Naming the state group here, as we only have one it does not really matter, if you have multiple groups on a page then by all means name them just to make it easier to organise them.

Next we need to add our default state so click the “Add State” icon on our new state group and name it “GameRunning” as follows: 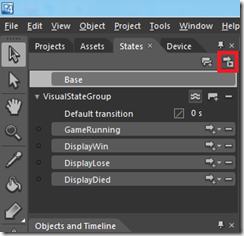 You will notice that the design window at this point now has a red border and a red icon is next to our new state, this means Blend is now in state recording mode, any property or control you change now will be recorded against the selected state. As this is our default state and everything is ready what ever you do do not change anything

Click on the “Add State” button on the state group again to add another state and call it “DisplayWin”: 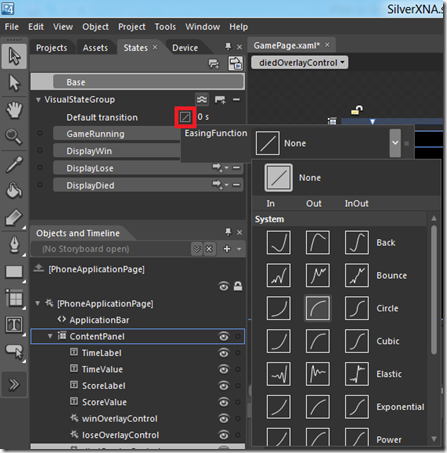 Now with this state selected we want to update our screen to represent what we want displayed when this state is active, so update the “WinOverlayControl” properties to the following (effectively resetting the control back in to the foreground)

You should now see the “WinOverlayControl” front and centre in the design window as shown below: 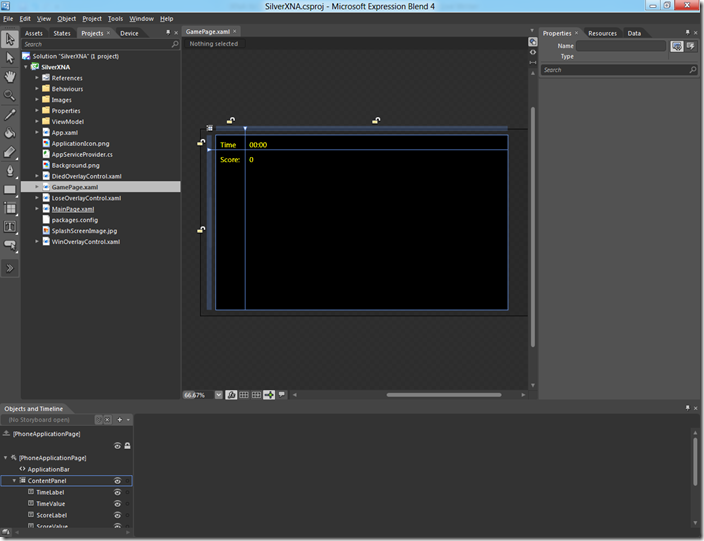 As before, make sure what you touch because everything you change will be recorded against the selected state, there has been many a time when I thought I then selected another state and started to update more properties only to fine I would just messed everything up by doing everything on the same or the default state

Now repeat the steps for the “WinOverlayControl” by creating new States (NOT state groups) and naming / updating properties appropriately, you should end up with the following state tree:

If you need to make changes to the base / default state or just look at the design view without mucking up any of your recorded states then just click on the “Base” state as shown above.

Now we have our states defined but we do not actually have any animation as yet, you can see this by clicking on the “Animation Preview” (highlighted above) icon and clicking on each state to show what happens when each is displayed, so lets update that.

So on the “Default Transition”, click on the “Easing Function” icon to show all the different ways you can animate between each of the states, for simplicity I selected the “Circle” function and then set the “Transition Duration” (next to the easing function button) to 1 meaning it will take 1 second to perform the animation (more than enough in most cases!)

Now when you click on each of the visual states you will see a nice animation for how each control with appear on the screen. You can go a lot further than this by controlling how each state transitions between each other and how they interact so I suggest you play around with this a lot more, even for a basic system it can give you a lot of functionality.

Now save all you changes and let us switch back to visual studio to get our code changes in.

Now to activate the visual states on the GamePage we need a way to hook our view model to our page but no events or properties exist in the framework to do this because the visual state manage is built separately, so we need to extend our page with a Dependency property, this took some searching the first time I was looking in to this for my own projects so I can at the very least save you some clicks looking for how to do this.

I also decided to keep these dependency properties and behaviours separate in this and my projects so I created a “Behaviours” folder in my project just to keep things tidy, so go ahead and create a new folder and then add a new class named “VisualStates.cs” with the following code: